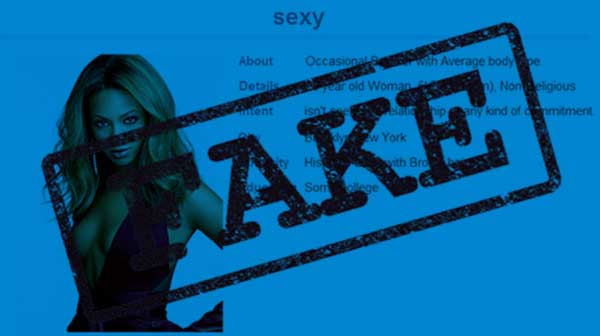 Okay now that we have gotten a little knowledge under your belt it is time to talk about how to spot fake profiles and scams. The number one cardinal rule is the same thing that your mother told you. If it sounds too good to be true, it most likely is. If you have a supermodel looking woman blowing up your email to have sex with her, you should probably take a moment to say, “Hmmm”. If a girl is so out of your league, or you don’t even play the same sport, it is probably not real.

Likewise if a girl is too sexually explicit, giving blow jobs to other guys, showing off her pornstar look, or doing other sexual acts in her profile, it is probably a fake profile that is being used to get you to throw common sense out the window. Sure, women like to see themselves in compromising positions, but if they are actually performing sex acts in their profile pictures, it is best to let it go. Use the profile for entertainment, but don’t partake from the forbidden fruit by contacting her. If it seems like you are being sold something, you are. It is fake.

How else do you spot dating scam profiles?

If she talks about “loving Canada and wanting to come visit with you”, it is an extortion scam. Any girl who is asking you to send her money, is not real. It is an old scam, old for us because we have been here before, but one that once you get online for a while you will see everywhere. The scam is that women solicit you for money saying that they want to come and have sex with you. You send them money online and low and behold, they disappear. Don’t ever give money to anyone online. That is just a given that you should know but in case you don’t, don’t.

When it comes to escort profiles they can be spotted by the fact that the picture is too unreal. If you are looking at a picture that has someone who doesn’t even look like they could be alive, they probably aren’t. Real girls who are on hookup dating sites are going to a photographer to have their profile pictures taken and then photo-shopped to take out the imperfections. If they are, well, you probably want to take a pass on them anyway. If a profile picture is too good and flawless, that is a red flag. No profile picture should look like it is professionally taken.

Now, you are probably questioning me “what if it is just a professional picture that she used”, I can go along with you to a certain extent with that. If the picture is one that is professional, that is a lot different than one that has been retouched to take care of the imperfections that any woman would have. When they are retouched photos that screams fake profiles no matter what you want to argue with me about. If the picture doesn’t seem real, the woman in the picture is not real. Enough said about that.

The whole idea behind a hookup site is to be too forward, no? There is a difference between being sexy and flirtatious and being downright too forward. If she is talking to you like you just called a 900 number then you are being scammed. The average woman is not above talking dirty if you request it and you say please, but if you are having your first conversation with her and it sounds like she is trying to sell you something, again, she is. Women that are too out there and too forward may get you in the mood for sex, but they won’t ever deliver. This type of scam is the most cruel because it is the biggest let down. If a woman is describing sex with you, most likely she won’t ever be having sex with you. It is a scam, run, don’t stop, run.

If she is asking you for information about yourself, especially personal information, don’t ever give any. There is no reason why she should want, or need to know, personal information about who you are. Not only is that the sign of a stalker, that is the sign that someone is trying to elicit information for more purposes than sex. If she is trying to get you to cough up information that you don’t feel good about giving, then stop the conversation and move along. There are plenty of fish to hookup with on hookup websites, why put yourself in the position where you could get hurt.

The one thing to bear in mind is that hookup sites are supposed to be fun and exciting, but there is nothing fun or exciting about being taken advantage of. If you ever get the feeling like something isn’t right, it isn’t. There is a reason why there is a little guy inside of you that sometimes screams for you to run and hide. Sometimes it is okay to throw caution to the wind and tell him to shut up. When you are dating English women on hookup sites it is never okay to ignore him. If he is any good he will just continue to scream louder.

Even if you are the most handsome dude in the world, if a girl is way too eager to have sex with you, there is something up. If she is asking you for money, you want no part of it and if she is asking too many personal questions, there is a reason why you are on a hookup site, you don’t want to make a connection. Those are all signs to move along. Watch the flashing lights and obey them.

What to say to a girl on a hookup website